review of Yona and Davis, ed. Epicurus in Rome 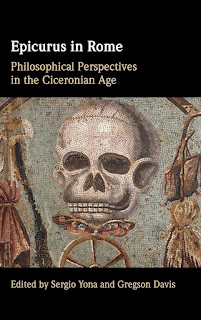 Contributors to this volume are distinguished Epicurean scholars and their papers are well written and enlightening, as should be expected. However, Sergio Yona’s introduction attempts to contextualize them in relation to the paradox of the popularity of an apparently very un-Roman philosophy in the late Republic. Now, a book investigating why and how that popularity arose would be more innovative than a simple gathering of diverse papers on Epicureanism in Rome, however well written; but if that is the purpose of this book, not all of these papers address it.

I shall discuss the papers in the order of their appearance in the book.

Sint Ista Graecorum: How to be an Epicurean in Late Republican Rome – Evidence from Cicero’s On Ends

The first two essays study Cicero’s hostile treatment of the Epicureans in order to weigh the possibility of a Roman choosing that school.

Geert Roscam opens the book with a satiric caricature of Epicurus; the caricature is right on target, but I fear it might encourage some readers to lay the book aside without further ado. After an intriguing discussion of why all the speakers in Cicero’s dialogues are Roman, and never Greek professional philosophers (because Cicero thought that the Roman aristocrats actually improved on what the professionals had to say), he examines Cicero’s arguments and rightly concludes that it was especially difficult for a senator to be Epicurean. (Incidentally, I should like to point out that the word ‘patronizing’ applies neatly in both its ancient and modern uses to Cicero’s view of Greek professionals.)

Daniel P. Hanchey skilfully penetrates Cicero’s rhetorical devices such as his disdainful references to Epicureans by citing their supposed principles rather than naming the school itself. Among the basic Epicurean ‘principles’ which Cicero rejects is an “animal-like failure to employ ratio (reason, logic) and oratio,” where the latter signifies the rhetorical activity which, according to Cicero, is the basis of community; hence their “failure to observe the natural social bonds that undergird the Republic”.

Both authors acknowledge that Cicero is a hostile witness, and both see clearly through his tactics. However, they remain sympathetic to him-- perhaps too sympathetic to draw out a fair picture of the Epicureans. Thus Hanchey: “Cicero spent the last decade or more of his life arguing for the value of a rational and virtuous society... in the belief that the Republic represented something abstractly good.” A more critical attitude towards Cicero’s own position might cast more light on the Epicureans. After all, here was a man who, because the Epicureans could not fully support a ‘community’ founded on imperialism and competitive internal rivalries which were already tearing it apart, degrades them to solitary animalistic individuals, when they were actually constructing healthy alternative communities to shelter one another from the storm. Surely this communal lifestyle-- open, as it was, to all classes-- attracted many in the turmoil of the civil wars.

Was Atticus an Epicurean?

Nathan Gilbert counters an earlier view that Atticus was not a serious Epicurean by offering a penetrating analysis of the context, rhetorical tactics, and nuances of Cicero’s correspondence with Atticus. The result, and Atticus’ own advice to Cicero are consistent with serious Epicureanism. However, as Gilbert understands, it was easier to follow that philosophy as an equestrian than as a senator.

Caesar the Epicurean? A Matter of Life and Death

Katharina Volk considers the hypothesis that Caesar’s gutsy indifference to death may indicate that he was an Epicurean. She asks what criterion we should use to qualify someone as an Epicurean, and answers, with a delightful flare of common sense, that we should ask them. Noting that neither Caesar himself nor anybody else ever described him as an Epicurean, she suggests that Epicurean ideas were current in the popular culture and Caesar, like others, adapted them to his own needs.

It seems obvious that Catullus’ personal disaffection with politics, his passionate concept of friendship, and especially his defiant, incorrigible indulgence in illicit romantic love are quite unlike the Epicurean version of the corresponding values. But it is no disservice to scholarship to demonstrate the obvious. Monica Gale does so through an intertextual study of Catullus, Lucretius and Philodemus.

“Love It or Leave It”: Nature’s Ultimatum in Lucretius’ On the Nature of Things

Kitsch, Death and the Epicurean

Lucretius’ thanatology must have deeply affected Roman readers at that time, and so it is the subject of two papers.

Elizabeth Asmis offers a very knowledgeable correlation of Lucretius with Epicurus and Philodemus.

Using novelist Milan Kundera’s peculiar concept of ‘kitsch’ as denial of filth and decay as her point of departure, Pamela Gordon interprets Epicurean sources (Lucretius, Philodemus) as lampooning conventional shallow ideas about death and philosophy. While the imposition of Kundera’s specific concept is not very convincing, much of what Gordon says about Lucretius is. Her discussion of the Epicureans’ own kitsch (rings, portraits of The Master) could be especially relevant for the issue of the school’s popularity in the Republic, if indeed serious Epicureans disdained such kitsch. But too often (e.g. as regards Philodemus and Horace), Gordon has to simply postulate that a text which others have taken seriously is intended as satire. This line of inquiry should certainly be pursued further.

Page, Stage, Image: Confronting Ennius with Lucretius’ On the Nature of Things

I’ve always wondered why Lucretius calls Epicurus a graius homo. Mathias Hanses’ explanation is striking proof of the relevance of Ennius for understanding Lucretius, as is the rest of his research on this subject. But the most interesting part of his paper for the issue of Epicurean popularity in Rome is “multi-medial intertextuality”: The correspondence of Lucretius’ narrative with Roman theatrical performances and wall paintings must have been intended to reach a broader audience, and probably succeeded.

We can readily intuit the importance of indifference to death and the support of an alternative community for Romans during the civil wars. But although Hanses’ argument has some difficulties (e.g., chronological), such cross-media research seems promising for future work on the question of the popularity of Epicureanism in Rome, especially given the hostility of some major literary sources. Studies relating literature to material art have already been very fruitful regarding Hellenistic Greek poetry (e.g., by Graham Zanker and Évelyne Prioux).

Lucretius on the Size of the Sun

The Epicurean position that the sun is only as large as it appears has been a thorny issue for ancient and modern critics. T. H. M. Gellar-Goad’s essay makes a plausible case in defense of the Epicureans’ position, claiming that they did reserve judgement (epokhe tes dianoias). It has nothing to do with the issue of their popularity in Rome.