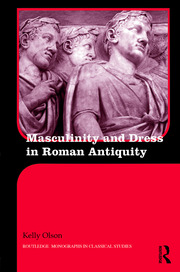 This little book is an excellent piece of scholarship. Olson, who has written a previous book on female clothing, has clearly mastered the field of Roman clothing, and dresses up her erudition in plentiful documentation. There are extensive notes and bibliography, and almost every matter in the text is illustrated with appropriate citations in Latin next to Olson’s astute translations. There is a summary at the beginning, and a conclusion at the end, of the book and each chapter. Previous research is acknowledged and a method is employed which weighs carefully the sometimes conflicting evidence of ancient literature and art. (Texts, Olson explains, could be ideological, describing how the writer thought men should dress, while art employed clothing-- not always realistically-- to represent the status of the subjects.)

Unfortunately there are occasional lapses of proofreading. Slips like “but is” for “but it is” (p.13) may be harmless, but the hapless undergraduate who tries to identify “Cornelius Neops” may be flummoxed.

Rome, as the author explains in her Conclusion, was a culture in which visual impressions were paramount. Hence Roman dress conveyed multivalent messages of rank, status and gender. Olson’s book is a thorough survey of Roman masculine clothing, but it is also aimed particularly at scholars of ancient sexuality and gender, who know how obsessed some Roman men were about standards of masculinity.

Possibly some such scholars did not know, for example, that although the toga signalled citizenship, it underwent variations in quality, in how it was worn, and even in style, which also revealed the wearer’s real or supposed wealth and status. This applies also to other articles of clothing. We learn some surprising facts: how clothes were “cleaned” in urine; how a slave wore expensively dyed scarlet to pass as a free man; how magistrates turned their toga backwards when passing a death sentence (cf. the black cap in Britain). These facts are interesting in themselves, but apparently some critics dismiss such details as ‘antiquarian’. Olson seems rather defensive on this point, fending off the charge of ‘antiquarianism’ (which, like ‘essentialism’, seems to be regarded as a label which can refute automatically without any ratiocination) by arguing that one should know all aspects of clothing before understanding the messages about class and gender. I would go further: The entire field of classical studies is antiquarian by definition, and just as in the physical sciences, which are indisputably untainted by antiquarianism, one must learn the facts for their own sake first before finding applications. A historian interpreting the dynamics of a Roman trial, for example, should know that defendants were expected to appear shabbily dressed in order to gain sympathy.

But perhaps the most important sartorial feature revealed by Olson is ambivalence. There was a complex of authentic and fake messages: garments worn by equestrians but also by pseudo-equestrian imposters, items or colours that could signify wealth and/or effeminacy, etc. Olson traces a constant rear-guard struggle by aristocrats to discredit wealthy upstarts encroaching on their prestige, which partly accounted for Roman authors’ praise of plain and simple garb.

After examining the complex codes of clothing and gender, and in particular the concept of effeminacy, Olson very plausibly suggests recognizing a separate social category that could be blurred with pathic homosexuals: viz., ‘dandies’, urban young men of fashion (mainly aristocrats) who were more interested in sex with women. She cites the terms trossulus and comptulus as referring to them, and reinforces her proposal by comparing pre-modern (17th to 19th centuries) notions of effeminacy described by historian Randolph Trumbach and queer theorist Alan Sinfield.

There is one issue which Olson has not treated adequately: legislation. We are told repeatedly that there was “no established legal hierarchy of clothing”, yet unauthorized men are said to be “illegally wearing” certain items. For example, while p. 19 refers to a senator’s right by law to wear wide stripes, p. 20 states that the width of the stripes was not regulated in any way. Emperors, in particular, are described several times as allowing or prohibiting various sartorial practices. Olson differentiates between legal and social sanctions, and includes a brief discussion of sumptuary laws; but it would be better to have a section clarifying the role and/or absence of legal sanctions and enforcement.

This book is valuable for gender scholars, but also delightful reading for disinterested ‘antiquarians’ like classicists.